Thank you for your patience while we retrieve your images.

Iona, the ancient sacred Island, lies very close to the west coast of Mull, yet it's a dimension apart.
It is an Island of wind and light, something untouchable pervades it.
Walk inland, on the moor up to the Hills, and look from there at the Abbey. Such a marvellous human creation lies in the wilderness of the rugged hebridean coasts. From there, it seems hidden like a secret.

The name Iona comes from the isle of Colm Cille (Saint Columba), here's the birthplace of christianity in Scotland, due to the mythical figure of that Irish priest, prince and saint.

The Abbey was built in 1200 AD where the ancient monastery stood, and the nearby St. Oran's chapel found its birth in the place where 48 Kings of Scotland and Norway had their resting place. Hear the whispers, the shadows, wander in silence and meditation; learn. 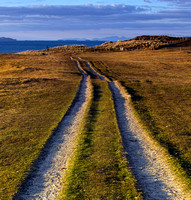